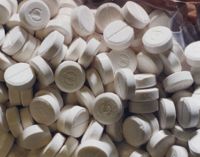 MDMA, commonly known as Ecstasy, X, E, XTC, Adam, etc., is a semi-synthetic chemical compound. In its pure form, it is a white crystalline powder. Ecstasy is taken orally, usually as a capsule or tablet. Ecstasy is popular among adolescents and young adults in the nightclub scene or at weekend-long dance parties known as raves. Ecstasy is also popular among gay males, and is sometimes used as part of a multiple-drug experience that includes marijuana, cocaine, methamphetamine, ketamine, and other legal and illegal substances.

Ecstasy stimulates the release of the neurotransmitterserotonin from brain neurons, producing a high that lasts from several minutes to a hour. Ecstasy's rewarding effects vary, depending on dose and purity, and the environment in which it is taken. Ecstasy produces stimulant effects such as an enhanced sense of pleasure and self-confidence and increased energy. Its psychedelic effects include feelings of peacefulness, acceptance, and empathy. Ecstasy is also known to produce confusion, depression, sleep problems, drug craving, and severe anxiety, which can occur soon after taking the drug or, sometimes, even days or weeks after taking Ecstasy.

Ecstasy can be addictive, and a survey of young adult and adolescent Ecstasy users found that 43 percent of those who reported ecstasy use met the criteria for dependence, as evidenced by continued use despite knowledge of physical or psychological harm, withdrawal effects, and tolerance. Ecstasy withdrawal symptoms include fatigue, loss of appetite, depressed feelings, and trouble concentrating.

Ecstasy is potentially dangerous to overall health and, on rare occasions, lethal. Ecstasy can have many of the same physical effects as other stimulants, such as cocaine and amphetamines. Side effects of Ecstasy include increases in heart rate and blood pressure, muscle tension, involuntary teeth clenching, nausea, blurred vision, faintness, and chills or sweating. Ecstasy can also interfere with the body’s ability to regulate temperature, which can lead to a sharp increase in body temperature (hyperthermia), which can result in liver, kidney, cardiovascular system failure, or death. Ecstasy damages brain serotonin neurons. Serotonin is thought to play a role in regulating mood, memory, sleep, and appetite. Recent studies suggest that heavy Ecstasy use causes persistent memory problems in humans.